A beautiful guidebook from 1920 (earlier versions were also published) to the “highest building in the world,” 233 Broadway, the Woolworth Building. Note the plate inside the cover: this copy came from the personal library of Seymour Durst! 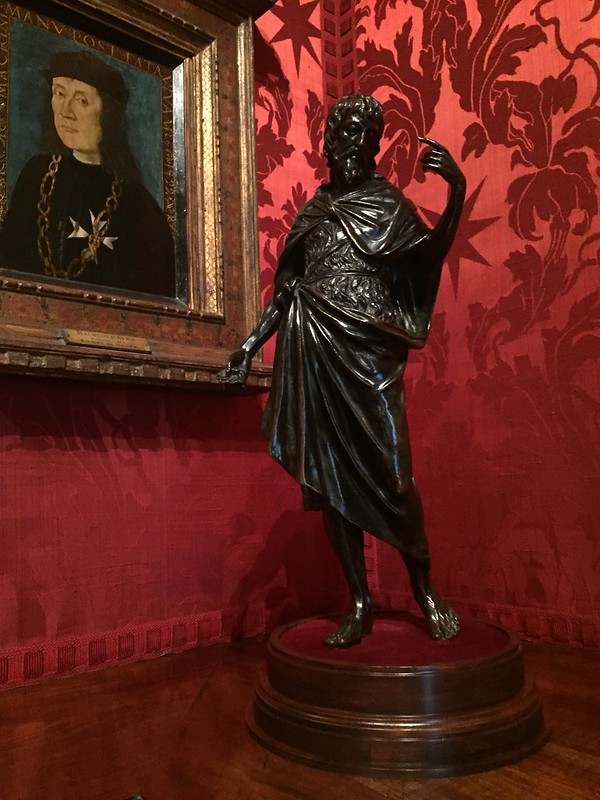 The main building on this campus was J. Pierpont Morgan’s private house, and included an incredible private library, complete with mezzanines and bookshelves that turn to reveal hidden, spiral staircases. The architectural detail of this property, alone, makes it worth a visit. The displayed collection currently includes a Gutenberg Bible, an original manuscript by Mozart, and a painting by Leonardo Da Vinci’s teacher. J.P. Morgan was also an avid collector of cylinder seals from the ancient world (little spools of lapis lazuli, obsidian, or other hard materials, that were carved with a unique image and pressed into hot wax in order to verify the authenticity of a document or packaged good). Morgan became something of an expert on these, and many items from his collection are displayed. Fascinating stuff.

Hushed in the smoky haze of summer sunset,
When I came home again from far-off places,
How many times I saw my western city
Dream by her river.

Then for an hour the water wore a mantle
Of tawny gold and mauve and misted turquoise
Under the tall and darkened arches bearing
Gray, high-flung bridges.

Against the sunset, water-towers and steeples
Flickered with fire up the slope to westward,
And old warehouses poured their purple shadows
Across the levee.

High over them the black train swept with thunder,
Cleaving the city, leaving far beneath it
Wharf-boats moored beside the old side-wheelers
Resting in twilight.