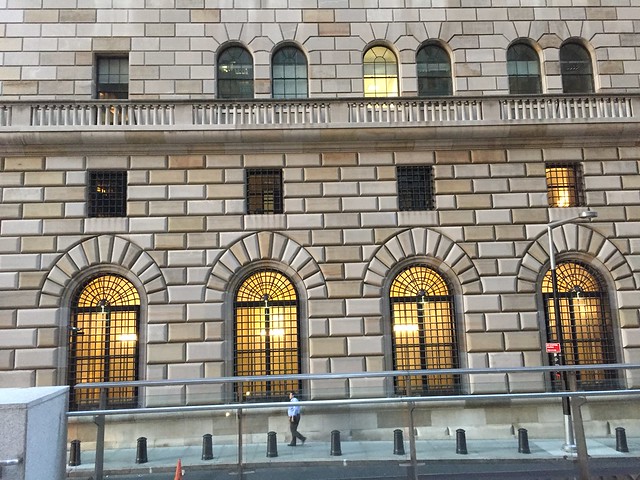 The Federal Reserve Bank of New York is a truly incredible landmark. Completed in 1922 in the style of a Florentine palazzo, this stone fortress was built to house the most important regional branch of the Fed. Its design served the secondary purpose of communicating the solidity of American banking under the Federal Reserve System. The smooth-faced, rusticated masonry alternates between blocks of gray and tan, conveying something that cannot be moved, while hinting at the silver and gold that still backed up American currency at the time.

Tours of the interior are available, but tickets can be hard to come by. Once there, the Fed requires that you take part in a guided tour, which runs about an hour. Honey and I went one day last summer. Although such tours are not my favorite approach to exploration, I found this one incredibly interesting. The guide provided a short history of the Federal Reserve System; the construction and architecture of the building, itself; and a tour of the active gold vault, deep below Liberty Street. Unfortunately, the Fed has a very strict prohibition on photography within the building (under penalty of camera confiscation).

A good decision was handed down by the New Jersey Supreme Court today on an important Mount Laurel controversy. In its unanimous ruling (responding to an interlocutory appeal from the Appellate Division), the Justices found that New Jersey municipalities must address the housing need that formed while the so-called Third Round numbers were in flux, between 1999 and 2015, in addition to the current need. This means the state’s towns and cities will be required to facilitate a larger number of affordable housing units.

As to the fundamental disagreement — whether the gap period must be addressed — we waste no time in settling that issue. There is no fair reading of this Court’s prior decisions that supports disregarding the constitutional obligation to address pent-up affordable housing need for low- and moderate income households that formed during the years in which COAH was unable to promulgate valid Third Round rules.

Right on. The persistence of Mount Laurel cases highlights the virulent opposition from New Jersey municipalities to a 1970s finding that municipal zoning may not be used to exclude housing opportunities for low- and middle-income families in entire municipalities. For more than 40 years, certain towns have perennially fought to prevent this law from being carried out in a meaningful way. Their main complaint — though they rarely concede this in public — is the ‘fiscal impact’ of households whose children add to the public school rolls without contributing enough in property taxes to cover their costs. (Incidentally, the same stupid approach to school funding is one of the chief reasons New Jersey has become a paradise for strip mall development: more ratables, no kids.)

Credit goes to the New Jersey Supreme Court, which has maintained its jurisprudence on Mount Laurel for more than four decades. This has been done in the face of constant political pressure from those who would rather allow exclusionary, market-distorting zoning laws to go unchecked, allowing towns to become more exclusive, while pricing out more and more long-time residents.